In March of 2008 the Borough Council formed a committee to develop a plan for the 53 acres soon to be purchased from Florham Park. During a visit to the site in June of that year, several projects were proposed, among them playing fields and walking trails. Charles Courtney proposed a Community Garden. Sub-committees were formed, and Sue Bessin and Courtney were appointed co-chairs for Passive Recreation. We recruited other members, including Chris Kellogg, Mary Anna Holden, Jane Hurwitz and Marta McDowell. By late 2009, the full committee endorsed our proposal for a 2,000 square foot garden. Soon after, the committee was disbanded.

Eighteen months later a new planning committee was formed in May 2011. Chris Kellogg chaired a garden steering committee. Those most active at those first meetings were Andrew Brown, Geoff Thomas, Lisa Kunish, Jim Casola, Steve Stocker, Meghan McAuliffe and Charles Courtney. We were given 1.2 acres in the Madison Recreation Complex, and planning began in earnest. Kellogg, an architect, created a plan for fencing and for plots which took maximum advantage of sun and terrain. In October he presented that plan and a detailed budget to the Borough Council. Supporters attended that meeting carrying garden tools. In December Council appropriated $47,150 of Open Space money to help us get started.

Since the site had not been touched for more than a century, much preparation was needed. Volunteers grubbed out hundreds of barberry and rosaflora plants. Stones, some as large as volleyballs, were removed. On the advice of Rutgers agents the soil was amended with nitrogen, lime, compost, manure and peat moss. Pete Coviello offered to plow the entire site, but his first attempt in the early spring left him in the mud.

Daniel Miller of GreenPath Landcare came back in March and finished the job. We advertised the Garden in the Madison Eagle and took names of interested gardeners at Bottle Hill Day. The Madison Ambulance Corps gave us a room in which to hold a well-attended information meeting. The result was that for the first season gardeners took the 60 plots available, and a few others were put on a waiting list.

The Grand Opening of the Garden on June 16, 2012, was attended by the Mayor and Council members. Excerpts from a speech by James Madison was read. On May 12, 1818, Madison said that “the faculty of cultivating the earth, . . . by which food is increased beyond the spontaneous supplies of nature, belongs to man alone.” A ribbon was cut, and gardeners signed their names on a commemorative stone taken from the site.

Ongoing support from the Borough has been a real boon. The Community Garden Advisory Committee is an official body, and the Borough processes all of our income and expenditures.

It took four years and hundreds of hours of work by dozens of volunteers to create the Garden. In the years since, it has grown in size, amenities, and diversity. 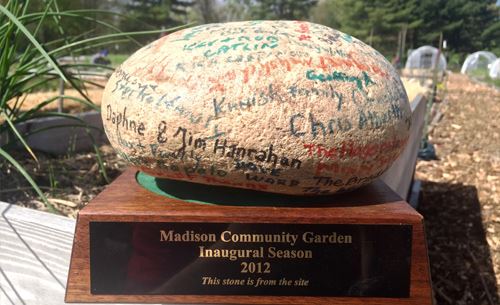 The Madison Community Garden owes its existence to a number of people and institutions. First and foremost are the Borough of Madison, the Mayor and Borough Council, for their support.

By approving the formation of a community garden within the Madison Recreation Center as part of the ’49 Acres’ development plan they planted the seeds for the Garden. They nurtured and watered the seeds by providing moneys for the start-up, including the fence and water system. When the Advisory Committee members decided to try to bring honeybees to the Garden, the Council unanimously approved a resolution. Their support has been complete and unwavering. Garden members also give special thanks to our Borough Council liaisons, who over the years have provided their support.

The Borough acquired the ‘49 acres’ land in 2008, and several dedicated individuals promoted the idea of establishing a community garden for several years before the Madison Borough Council approved the proposal and provided funding. The site was formerly an overgrown field, and needed substantial improvement of the soil before gardeners first established plots in the summer of 2012.

A number of local businesses and organizations have also helped the Garden:

Lastly, the gardeners themselves, past and present, who have dedicated their time and energy to making this idea a resounding success. Without them, none of this would have happened.