Our Mission
A vibrant downtown benefits the community, reduces taxes and gives all Madison residents a sense of pride and identity. So, please remember to support our local merchants. They are our friends, our neighbors and they make our town a wonderful place to shop and dine. The big box stores won't miss a few sales... but a few extra sales to a merchant in town will have a BIG impact.

Thank you for supporting the merchants of Madison, New Jersey.

It is important to remember that the merchants in town give so much back to the community. Chain stores and websites don't support the local civic and non-profit organizations, but our merchants do! Tricky trays, May Day, hanging baskets, holiday decorations, fundraisers, etc...the list goes on and on.

In total, our local businesses donate over $500,000 a year to local organizations. 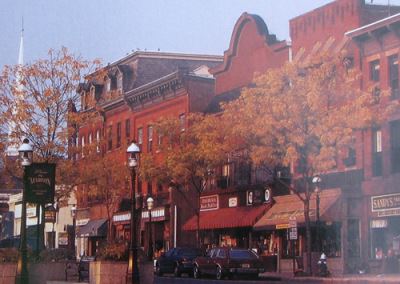 The Origin of the Message
What is the origin of the "Shop Madison" message? Certainly, the idea of shopping locally has been around for decades. The Chamber of Commerce started in the 1940s. The Borough Council created the Downtown Development Commission in the early 1980s. And the Madison Eagle has been promoting 'shop locally' for decades. So, the idea of supporting downtown is not new.

Having said that, a significant turning point in the movement recently came about in March 2008, when Garry Johnson's Letter to the Editor was published in the Madison Eagle. Garry's simple yet eloquent letter struck a cord with many. It put into words, the feelings that many people had. Photocopied versions of the letter soon started popping up in downtown windows.

Kudos to Garry for putting pen to paper and creating such a wonderful piece. Personally I believe this letter could stand the test of time, and hopefully will be read locally for years and years, much like the now classic "Yes Virginia, there is a Santa Claus".

Please take a moment to read the below letter.

"If You Love Madison, Then Shop Madison"
Madison Eagle Letter to the Editor
Published: Friday, March 7, 2008 6:02 AM EST

The news that Scotti’s Record Shop has closed after 45 years should be a wake-up call to all Madisonians.

Sure, one could easily argue that competition from music downloads was the cause, but note that Gary Scotti says his other stores, in other towns, are doing fine.

There must be some other reason why yet another independent business has been forced to close its doors. I think the answer is simple: while we all love Madison, not enough of us “shop” Madison.

Before moving to Madison 15 years ago we lived for several years in an affluent shore community in Fairfield County, Connecticut. It was a vibrant place with an incredible variety of small independent businesses, shops and boutiques. In fact, one of the main reasons we chose Madison when we moved here in 1992 was how much the downtown reminded us of that place in Connecticut with its small shops and restaurants.

I recently had occasion to visit that town again. The character has completely changed, and not for the better - the small shop-owners have been largely replaced by upscale chain stores - all the familiar names. Very nice stores, but also the very same ones you would find in hundreds of other communities and malls across the country. What had been the charming and unique character of the downtown area had been completely transformed into some sort of bland commercial sameness. Kind of like all those catalogs you get in the mail; sometimes it’s hard to tell them apart.

Let’s not let this happen to Madison. Now is the time to step up and shop in Madison and support our local merchants. In our family, we have a simple rule: at least 80 percent of our spending on everything from cameras to televisions to bicycles to gardening supplies to sporting goods to luxury items to carpeting to dining-out to buying gas is spent in this town.

Do we sometimes end up paying a little more? Yes, but only on occasion. Does that "matter” No, because if we all did this, shopped Madison more often, or even made an attempt to do so, the vibrancy and charm of our downtown could be assured for many years to come, and worth a whole lot more than any small premium we might pay now.

If we do nothing, will the next independent business to close its doors be the one you always walked by, admiring its window display, but somehow never managed to buy anything from? Think about it.